Acts of kindness are common, welcome at this time of year 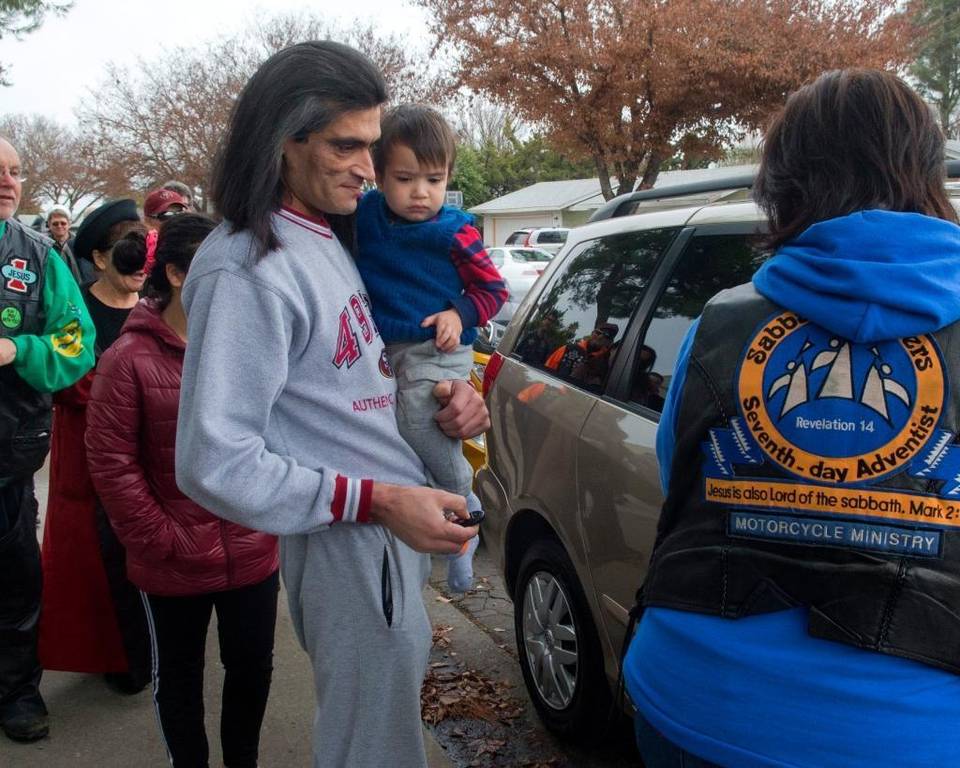 Stephen Sadeghi stands by his new car that the Seventh-day Adventist Church gave him, in Modesto on Sunday, Dec. 20, 2015. The Iranian Christian refugee had been imprisoned in Iran for trying to distribute Bibles and spread Christianity in a Muslim country. John Westberg jwestberg@modbee.com Read more here: http://www.modbee.com/news/local/news-columns-blogs/jeff-jardine/article50928305.html#storylink=cpy

This is the time of year when people are inspired to help others, and sometimes because they are inspired by them.

Here are some recent acts of kindness you might find inspiring:

A few weeks ago, Nora George walked into The Bee’s newsroom, a woman anguished by being able to do only so much. Her heart broke, she said, for a family of refugees from Iran. She told me their story, which I retold in a column earlier this month.

The husband, Stephen Sadeghi, in 2010 spent two months in Tehran’s notorious Evin Prison because he had the audacity to try to spread Christianity in a Muslim nation. Evin is the same prison where American hikers Shane Bauer and Josh Fattal were held for 781 days on a trumped-up espionage charge, and their time overlapped with Sadeghi’s, who was tortured repeatedly before his release.

He took his family to a refugee camp in Turkey, where they met a Seventh-Day Adventist minister who arranged for them to come to the United States and Modesto. There, one of the minister’s relatives could help them get settled. But the benefactor here encountered problems of his own: His son required specific medical care that forced him to move to another state to seek treatment. It left Sadeghi, his pregnant wife, young son and 12-year-old stepdaughter with virtually no help, no safety net.

George stepped up to pay their utilities and enlisted others from the Seventh-day Adventist Church in Ceres to help as well.

Four things have happened since that are game changers for the family.

First, Sadeghi needed to find a job. Speaking only a few words of English, and with legs still hurting from the prison torture sessions, the odds weren’t good for finding work.

The column appeared Dec. 3 in The Bee’s print edition. I received a call that same morning from Gary Acosta who, with his sons, owns a cabinetry shop in Hickman. He’d read the story. Sadeghi risked his life to worship as a Christian and spread the faith in Iran, Costa said. He had a job for him. That afternoon, with George interpreting in the Farsi language, Costa hired Sadeghi to work in his shop.

They also arranged a ride out to Hickman with another employee, George said, because Sadeghi’s car had been totaled in an accident in Modesto.

And that is where the second “miracle,” George calls it, came into play. Sunday, the Sabbath Keepers Motorcycle Ministry of the Seventh-day Adventist Church took care of that problem, too. They purchased a car and delivered it to the family’s apartment complex in north-central Modesto.

Next, Evelyn Heilbronn of Modesto offered to pay for a year’s worth of cable TV and Internet fees, which George believes will be vital to the family’s ability to learn English and for the children to excel in school. And to that effect, retired teacher Rebecca Brooks now visits their home to tutor them in the language, an effort supported financially by sabbath class members including George from the church.

So Sadeghi and his family are getting the kind of help they need to gain firm footing in America.

Another act of kindness, totally unrelated to the Sadeghi family, came from a woman in the town of Homer Glen, Ill. The connection? One of the world’s most famous photographs.

She called me before Thanksgiving because she wanted to send a note of appreciation to Katherine McIntosh. McIntosh, readers might remember, was the young, camera-shy girl on the left in the iconic portrait of Florence Owens Thompson. Titled “Migrant Mother,” government photographer Dorothea Lange took the photo at the Nipomo labor camp near Santa Maria in 1936 as part of a project to chronicle the Great Depression.

I wrote a column about the photo and the family for The Bee’s “Dust Bowl” series in 2008. The woman in Illinois came across it online and called me. She told me she keeps her copy of the photo on her office wall because Thompson’s hard life in the fields mirrored her own mother’s existence during the Depression as well.

Her mom, she told me, gave birth to a boy one day and returned to the fields the next, and lived under the same harsh conditions of the era.

“It touches me every time I look at it,” she said.

McIntosh, about 6 years old when the photo was taken, is now 85 and retired, though she still works odd jobs to keep busy.

The woman sent her a letter and a $100 bill for Christmas. In return, McIntosh sent her one of the commemorative Migrant Mother stamps issued by the U.S. Postal Service in 1998.